I enjoy reading short horror stories, especially those that send shivers down my spine without gross violence and gore. Two authors whose subtle, suspenseful horror I admire are Amelia Edwards and Edgar Allan Poe. 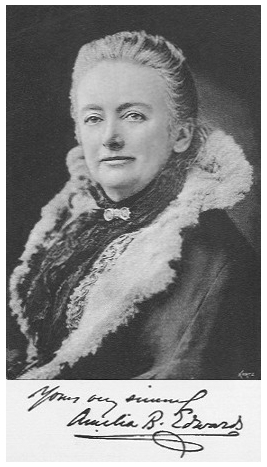 Amelia Edwards (1831-1891) travelled widely in an era when few women had the chance to explore much of the world outside their homes, and her travel experiences inspired many of her stories. Her skilful descriptions (for example, a moor landscape covered in deep snow with a storm approaching, an old coach with its mould-crusted leather fittings) evoke the locations and create a spooky atmosphere.

The scenery and the weather are so vivid that I feel I’m trapped in a snowstorm in an English moor,hiking on a dusty road in southern Germany, or climbing a rugged path in the Swiss Alps.

She creates suspense by placing the main character into an unfamiliar environment and isolating them from their friends and all sources of support, so they face the unfamiliar danger alone.

Often, the boundaries between the natural and the supernatural are fluid, and the main character (and the reader) cannot be certain where one ends and the other begins. It all feels very real.

Two collections contain stories by Amelia Edwards, both with similar titles: “The Phantom Coach and other Stories” by Amelia Edwards is cheaper, but “The Phantom Coach. Collected Ghost Stories” edited by Richard Dalby has more stories. Confusingly, various book-selling websites list the author with different name variations, e.g. Amelia B. Edwards or A. Blandford Edwards.

Edgar Allan Poe’s stories grab with their intensity and don’t let go. They thrust the reader into the darkest corners of the human psyche. While reading, I feel I’m inside the narrator... and with Poe, that’s an uncomfortable place to be.

The first horror fiction I ever read was at the age of fourteen, in a booklet of Poe stories - A Descent into the Maelström, The Pit and the Pendulum – and I was hooked on the genre. Later, I discovered more of his stories, and have never forgotten them. The Black Cat, The Tell-Tale Heart, The Masque of the Red Death and The Raven are my all-time favourites.

Poe’s horror is psychological rather than physical. The stories shock and stir, but they don’t gross out. The author also wrote mystery stories of the type we would nowadays call ‘whodunnits’ but those are too long-winded for most modern readers’ tastes.

Both authors have influenced my own horror writing, Poe with his dark intensity and Edwards with her atmospheric creepiness.