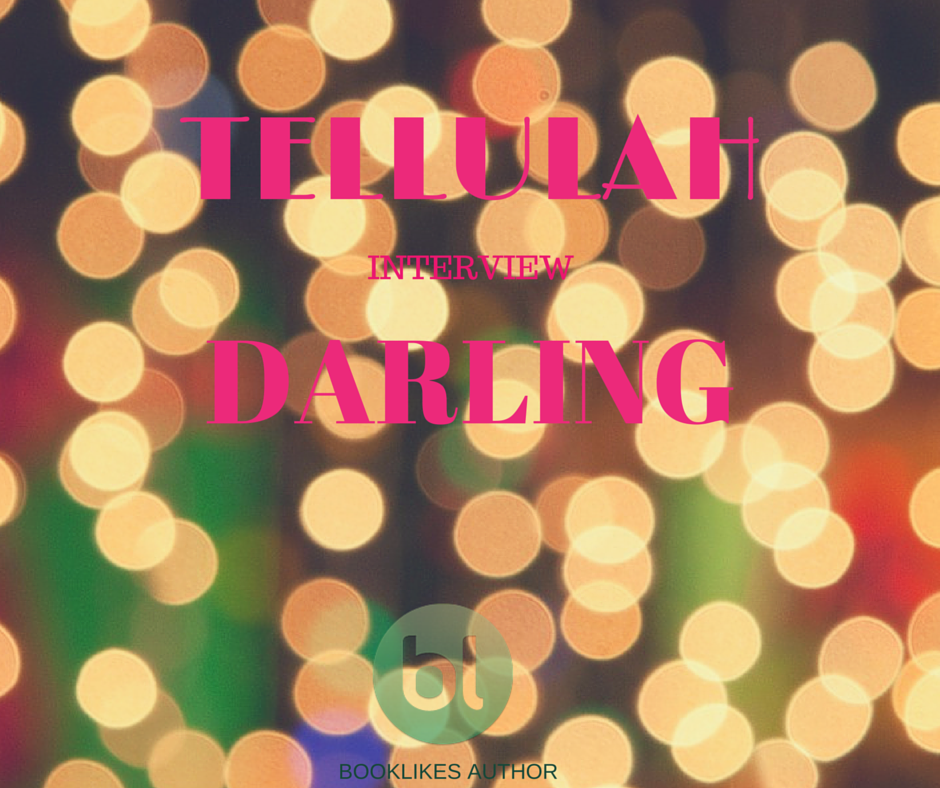 A witty joker, fan of good love stories and quirky romance writer herself. Also, a real darling. That is Tellulah Darling, ladies and gents. Since her latest book, Get Real is available September 25th, what possibly could be a better excuse to have her over for a chat?!

Enjoy the conversation BookLikes had with the author of My Ex From Hell and enter the Giveaway to win Tellulah's new book.

What are you reading now, Tellulah?

Two books that I just finished and loved were I’ll Give You The Sun by Jandy Nelson and Reconstructing Amelia by Kimberly McCreight.

Did your first kiss really suck?

Unbelievably so. Think attack of the giant fishy lips.

Got you. So, let’s play a little game. Imagine taking back the time: which of your (or others) book character you’d like to get swapped for your perfect first time kisser then?

Okay, for a first kiss, it would have to be Sam from Sam Cruz’s Infallible Guide to Getting Girls. He’d make it perfect. Totally screw things up afterwards, but that first time? Yeah.

Your new adult romantic comedy, Get Real, is about to be released (25th September!), congratulations! ‘Sass, sex, and swoon, set in the world of “Cadabras” -- humans with magical powers.‘ Now, that seems to be a really explosive mixture! Can you tell our bloggers more about the book?

Thank you! I am a sucker for romantic comedies. They’re my happy place. Thing is, I don’t tend to write straightforward ones. Once I start thinking about plot, I get into crazy mythologies, made-up magic, and madcap urban fantasy adventures. It’s incredibly fun for me to set a romantic comedy against a backdrop of something more fantastic.

Get Real, however, actually came from a very different place. When I was growing up, I lived in a town where mine was the only Jewish family. I dealt with othering, ignorance, and flat-out racism. I was also a reader girl who wanted nothing more than to find someone like me in the pages of a book, having an adventure or being a romantic lead. Sadly, all I could find were issue books where being Jewish was treated like some kind of after-school special. I lived that. I didn’t want to read it. With my NA debut, I wanted an awesome heroine who happened to be Jewish. 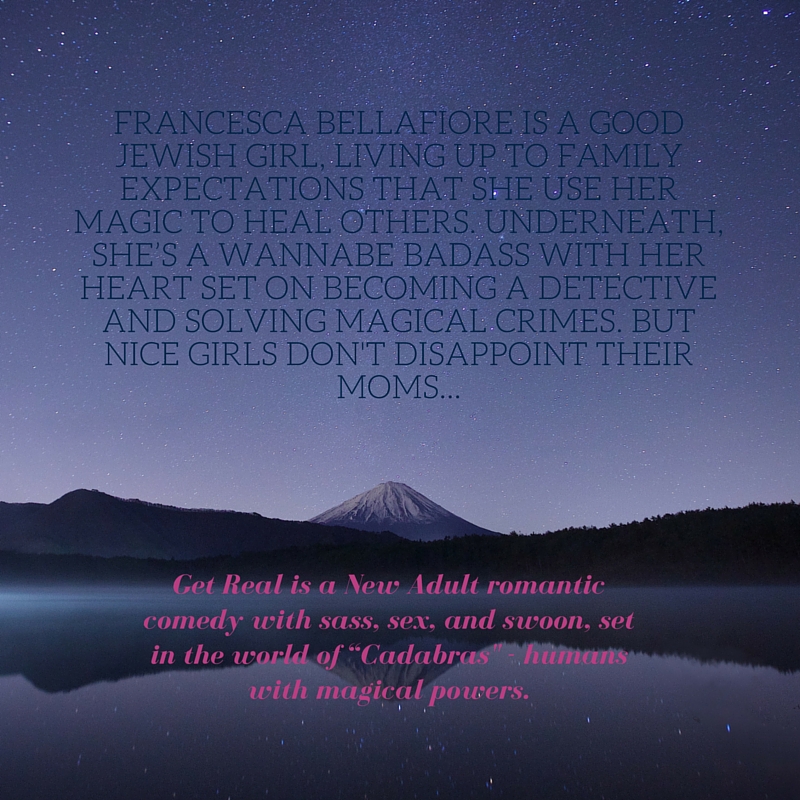 Once I’d figured out who Francesca was as this Jewish good girl, I needed the very bad boy who set her teeth on edge. That was Rafael. Then it was all about how much fun I could have with a sexy, sassy, swoon-filled urban fantasy adventure and how far I could take these two without having them kill each other. In the end, as it always is, their journey became about the impact these two have on each other in terms of their specific character issue, in this case getting real about what they want from their respective lives.

What is the story behind this sass and humor loving author, how did you end up being a writer?

I’ve always written though I never thought writer was an actual career path for an ordinary person. On the plane ride to university I was trying to pick my courses, and my mom said, “How about film?” I thought she meant as a degree. Apparently she only meant as an elective. :P Once I had my film degree in hand – my M.A. in Film Theory actually, I planned on staying in academia and writing film history and criticism.

Then I met a boy.

My now-husband actually, a filmmaker. We decided to write some shorts together which eventually led to a career in screenwriting. After a great twelve year run, I was burned out and wrote a YA romantic comedy novel for fun, because I love reading YA and I’m a romcom junkie. I wasn’t thinking of a career, more like just checking to see if I still enjoyed writing. Four YA books later and now my NA debut and that love is still going strong.

This is the question we had asked pretty much every author we had here and  that's because we are really nosy, nothing else: Do you have any writing habits, like drinking a coffee from your lucky mug, not writing on Mondays, inventing the plot while riding a bike?

Not really. I don’t even have a schedule. There are weeks when I do no writing at all. I’m scrawling furious notes on scrap pieces of paper and my iPhone and various files on my laptop. Waking up at 3AM to jot something down. Eventually, the time comes when I start compiling all my thoughts, outlining, researching and eventually writing my first draft. That’s when I become consumed to the point of resenting my family for having the audacity to want meals and clean clothes. Kidding aside, they are very patient with me in that state and know to yell my name several times before I’ll answer.

You have been previously writing for the TV & film industry for quite some time, actually. Usually, writers are interested in their career evolving the other way round: books to screen… How has your previous experience been valuable, later in your book author career?

Absolutely. I knew some of my experience from the screenwriting world would prove invaluable, such as my understanding of theme, structure, and even marketing from the indie films I did. But on a film or TV set, there is a crew bringing your vision to life. So screenplays keep description and action brief. That was a big learning curve for me. How to flesh out my world, my five senses and bring it alive on the page. In the end, I’m glad I came to novel writing this way. 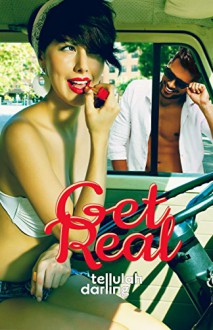 Some would say, it’s easier to make the reader/audience follow the story when there is a visual layer to go with the content. How do you keep your books entertaining for the reader?

You might want to ask my readers that. :) Because I am such a fan of romantic comedy whether movies, TV shows, or books, I’ve consumed and studied a ton of them. What I found was a lot of storytelling billing itself as romcom that was missing the comedy. For me, romantic comedy needs an equal emphasis on both parts. The romantic ending needs to be earned and the journey needs to be hilariously painful. I think my strength is delivering both romance and comedy in satisfying amounts.

Which TV/movie screenwriter +  title/titles you think is absolutely brilliant?

How long a list can I give? In terms of writer/showrunners - Joss Whedon for Buffy, obviously. Mindy Kaling for The Mindy Project (best romcom on TV!), Stephen Falk for You’re The Worst (best anti-romcom on TV!), Graeme Manson for Orphan Black, Ronald D. Moore for Battlestar Galactica, Vince Gilligan for Breaking Bad. Nora Ephron as queen of the film romcom, the wit and heart of Billy Wilder and screwball genius of Charles Lederer and Ben Hecht. There are literally tons and tons of screenwriters that I admire.

YA is one of the most popular genders on BookLikes, but surely in a wider scoop as well. Although the demand is high, not every romantic novel has 'it'. What more besides the actual love bit should this gender offer to the readers?

Despite my love of throwing other elements like magic into the romantic mix, I think it comes down to voice and earning that happily-ever-after. Our job as writers is to make our readers emotionally connect with our characters. And all the vamps or magic or backwards storytelling or whatever are not going to matter if we haven’t done our job.

Generally, readers already know going in to a romance whether there is a happily-ever-after or not waiting for them at the end. We authors need to make the audience doubt the outcome. Make our characters work for that ending. And do it with a voice that engages our readers. We need to spellbind and that comes from the essential nature of the story itself, not the bells and whistles.

One can find a lot of references to ancient mythology in your books. This is pretty unique -- where did this interest came from? Why did you decide to use this typology in your writing?

I grew up on a steady diet of myths and fairy tales and I always loved the idea of putting my own spin on them. After Sam Cruz, which was straight romcom, I wanted to delve into mythology and Persephone had always fascinated me. There was something unfinished about her and her story, like she was a passive player and not the MC of her own life.

I really wanted to write about a girl living under the radar, handed ultimate power whose journey becomes one of empowerment. What better way than to have a teen girl have a goddess awakening? Plus Greek myth meant gods behaving badly and my own addition of a bad boy ex-boyfriend god. All these elements made sense for My Ex From Hell and the two subsequent books in the trilogy.

What are you working on now? New book? Screenplay?

Since Get Real is book one in a four-book series, each with it’s own self-contained romantic comedy set against this ongoing urban fantasy adventure, I was supposed to spend the summer writing Freak Out, which is book two. Except I got completely distracted (i.e. obsessed) by an adult romcom/urban fantasy that demanded to be written. I’m revising that one and have finally turned my attention to Freak Out. It’s great to be back with these characters.

Humor seems to be your tread mark. How would you describe your sense of humor.

Skewed. Sarcastic, often inappropriate – but I hope not mean.  I was raised in a family where we poked fun at ourselves and our lives. We couldn’t help but laugh at a lot of things. That’s how I view the world. With a quip.

So, who do you enjoy more then: Woody Allen, or Amy Schumer?

I was raised on a steady diet of old Woody Allen and Neil Simon movies so I will forever have a fondness for those. Nowadays, however, while there are incredible male comedians like Chris Rock and Ricky Gervais that blow my mind, I definitely identify more with the humour of the brilliant women like Amy, Kristen Wiig, Tina Fey, Sarah Silverman, Chelsea Handler, and (my super crush) Mindy Kaling.

Most definitely, we could carry this one on much longer, as it is a great fun talking to you. Thank you, Tellulah!

However, let's give the BL bloggers a chance to get your new book, go to Get Real Giveaway (it starts Friday 25th September just after 4 p.m. CET).

Thank you so much for having me! 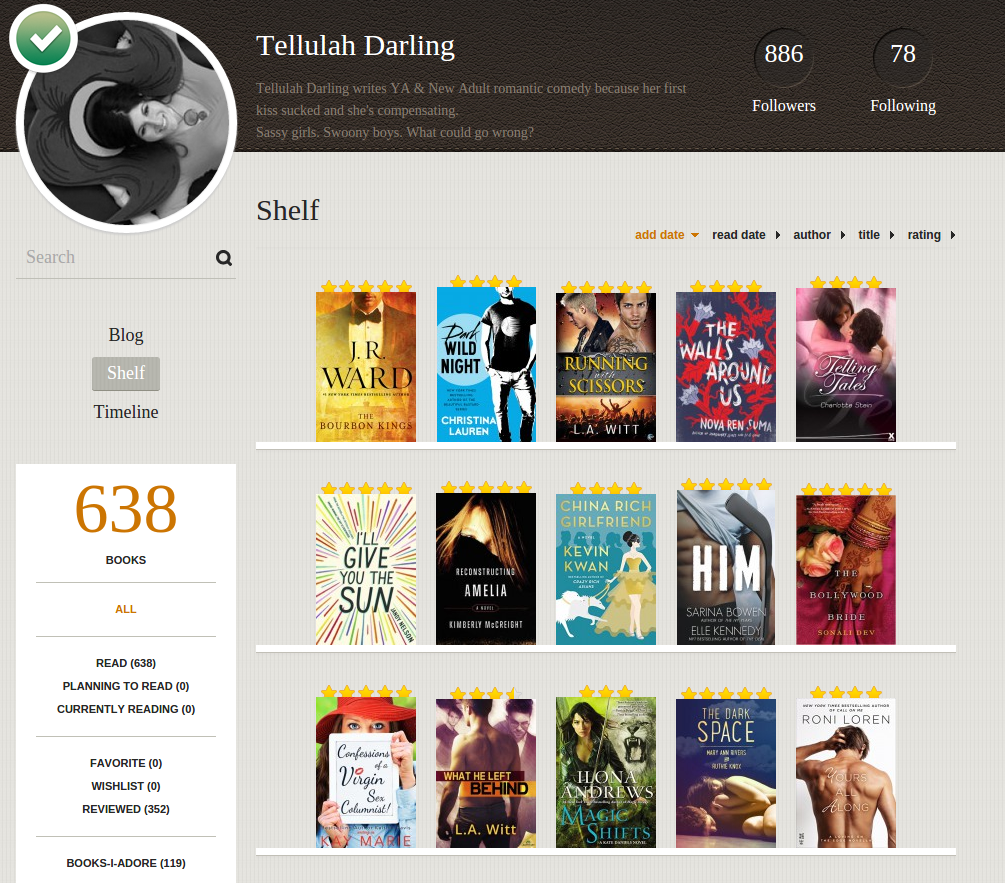 Wonder what Tellulah Darling is reading herself

and what books you could find on her shelf?

Visit her BookLikes blog and catch up with Tellulah's reviews.