12 Books To Read If You Miss The Royal Wedding Can't get enough of the royal wedding? Miss the royal atmosphere already? Here come books to the rescue! Check out 12 titles which will transfer you into the royal setting and wedding-to-come (or not) story line.

The Runaway Princess by Hester Browne The Princess Diaries meets Runaway Bride in this wonderful novel about a London career girl who embarks on a whirlwind romance with a mysterious man--only to discover that he's a prince.

Bookworm Dreams REVIEW: If you want to know 100 reasons why you should not date (or God forbid) marry a prince and you like chick lit novels with quirky characters and English humor, then The Runaway Princess

might be the book you are looking for... READ MORE From the #1 New York Times bestselling author of the Princess Diaries series, comes the very first adult installment, which follows Princess Mia and her Prince Charming as they plan their fairy tale wedding--but a few poisoned apples could turn this happily-ever-after into a royal nightmare.

Kaethe REVIEW: Cabot successfully translates her YA heroine into a twentysomething involved in politics, celebrity, TMZ, stalkers, a weird family, and plenty more. I loved it. My 16-year-old, who had left off reading the Princess Diaries around volume 7 or 8, loved it. Really, just a tremendously fun book... READ MORE

The Royal Runaway by Lindsay Emory

Filled with intrigue, romance and mystery, Lindsay Emory's The Royal Runaway will whisk you away on a romantic, glamorous and royal adventure. For fans of The Princess Diaries and The Royal with a splash of James Bond, The Bourne Identity.

Princess Theodora Isabella Victoria of Drieden of the Royal House Laurent is so over this princess thing. After her fiance jilted her on their wedding day, she's finally back home after spending four months in exile - aka it's back to press conferences, public appearances, and putting on a show for the Driedish nation as the perfect princess they expect her to be. But Thea's sick of duty. After all, that's what got her into this mess in the first place. So when she sneaks out of the palace and meets a sexy Scot named Nick in a local bar, she relishes the chance to be a normal woman for a change

A Princess in Theory by Alyssa Cole / Buy it

A Duke by Default by Alyssa Cole  / Buy it From acclaimed author Alyssa Cole comes the tale of a city Cinderella and her Prince Charming in disguise. The chemistry between them is instant and irresistible, and flirty friendship quickly evolves into passionate nights. But when the truth is revealed, can a princess in theory become a princess ever after?

The Royal We by Jessica Morgan, Heather Cocks Celebrate Prince Harry and Meghan Markle's wedding with this "fun and dishy" (People) royal romance about an American girl finding her prince.

American Bex Porter was never one for fairy tales. Her twin sister Lacey was always the romantic, the one who daydreamed of being a princess. But it's adventure-seeking Bex who goes to Oxford and meets dreamy Nick across the hall - and Bex who finds herself accidentally in love with the heir to the British throne.

So many books so little time REVIEW: I feel like this is a great summer read.  There is witty banter, lovey doveyness and cooky characters so I found it rather enjoyable.  It is the perfect book if you are in  the mood for a chuckle... READ MORE Don't miss the irresistibly funny conclusion of The Crown Jewels Romantic Comedy Duo for fans of both Bridget Jones and The Princess Diaries…When most girls get engaged, at most they face a disapproving mother-in-law, but in Tessa Sharpe’s case, it’s a disapproving nation.

Daisy Winters, average sixteen-year-old, has no desire to live in the spotlight - but it's not up to you when your perfect older sister is engaged to the Crown Prince of Scotland. The crown - and the intriguing Miles - might be trying to make Daisy into a lady, but she may have to rewrite the royal rulebook.

sunsetxcocktail REVIEW: This book was like a giant rom-com cliché. The alternate history for the Royal family was eye rolling and cringe worthy. That being said once you over look those things, it was actually a very entertaining read. Irritating as hell, but fun... READ MORE Fairy tales always have a Prince Charming and a bad guy. In real life, Prince Charming is the bad guy and his favorite happy ending is the big O.
I'm Prince Dare but you can call me Prince Charming. Cinderella never wanted the prince--she wanted a night out, a banging dress, and some midnight fun. I deliver that. I make being bad look way more fun than being good, and no one leaves my royal bed without a happy ending.

Hopeless Romantic REVIEW: Forget the tale we think we know. Royally Hung is a new kind of fantasy. The charming prince is a royal jerk with a chip on his shoulder and an appetite for the naughty side of life. Dare is no walking dream, but he does have a few surprisingly sweet attributes... READ MORE 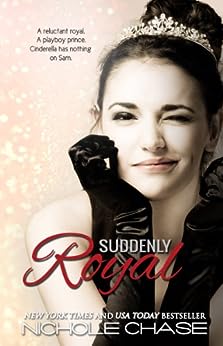 Samantha Rousseau is used to getting her hands dirty. Working toward a master's degree in wildlife biology while helping take care of her sick father, she has no time for celebrity gossip, designer clothes, or lazy vacations. So when a duchess from the small country of Lilaria invites her to dinner, Samantha assumes it's to discuss a donation for the program. The truth will change the course of her life in ways she never dreamed.

A Kiss at Midnight by Eloisa James Miss Kate Daltry doesn't believe in fairy tales . . . or happily ever after.

Forced by her stepmother to attend a ball, Kate meets a prince . . . and decides he's anything but charming. A clash of wits and wills ensues, but they both know their irresistible attraction will lead nowhere. For Gabriel is promised to another woman—a princess whose hand in marriage will fulfill his ruthless ambitions.

Rachel's books REVIEW: I enjoyed this retelling of Cinderella. Like every historical, it is predictable (but isn't that part of the reason we love them? Well, most/some of them!) I enjoyed the journey and HEA... READ MORE

To Marry a Prince by Sophie Page Can an ordinary girl survive preparations for her very own Royal Wedding? Bella Greenwood isn't a fairytale girl. If pushed, she'd probably tell you that her perfect wedding would involve a handful of close friends and family. But as she's never met anyone she'd like to marry, it is a moot point. Until, in a midnight garden, Bella is helped out of an embarrassing situation by a tall, dark, handsome man with laughing eyes. Suddenly her life changes for ever, because the man is the world's most eligible bachelor—Prince Richard, heir to the throne.

If you'd like to have all the titles on your bookshelf go to the Royal Wedding Books Reading List and click Add all books to your shelf.