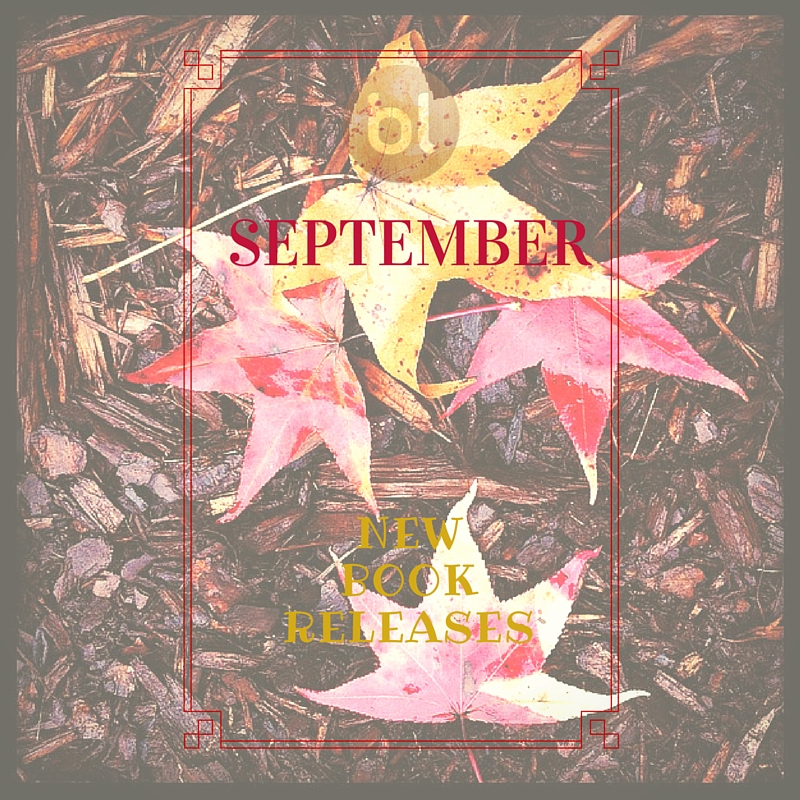 Kids are back to school and everybody is back at work. After Summer break, book industry is picking up again. Hence new, exciting releases are arriving in the bookshops. And it's about time because these evenings are coming sooner and getting gloomier.

Let's see what they got out for us, book lovers. Check this 9 early Autumn new releases in #Fiction #Romance #Thriller, #Historical #Non Fiction that we are going to put on our shelf soon. Let us know what new releases you are awaiting, post your list with new releases September tag

Out from 1st September

A magnum opus for our morally complex times from the author of FreedomYoung.

Pip Tyler doesn't know who she is. She knows that her real name is Purity, that she's saddled with $130,000 in student debt, that she's squatting with anarchists in Oakland, and that her relationship with her mother - her only family - is hazardous. But she doesn't have a clue who her father is, why her mother chose to live as a recluse with an invented name, or how she'll ever have a normal life. Enter the Germans. A glancing encounter with a German peace activist leads Pip to an internship in South America with The Sunlight Project, an organization that traffics in all the secrets of the world - including, Pip hopes, the secret of her origins. TSP is the brainchild of Andreas Wolf, a charismatic provocateur who rose to fame in the chaos following the fall of the Berlin Wall. Now on the lam in Bolivia, Andreas is drawn to Pip for reasons she doesn't understand, and the intensity of her response to him upends her conventional ideas of right and wrong...

Out from 1st September

From the author of The Drunken Botanist comes an enthralling novel based on the forgotten true story of one of the nation’s first female deputy sheriffs.

Constance Kopp doesn’t quite fit the mold. She towers over most men, has no interest in marriage or domestic affairs, and has been isolated from the world since a family secret sent her and her sisters into hiding fifteen years ago. One day a belligerent and powerful silk factory owner runs down their buggy, and a dispute over damages turns into a war of bricks, bullets, and threats as he unleashes his gang on their family farm. When the sheriff enlists her help in convicting the men, Constance is forced to confront her past and defend her family — and she does it in a way that few women of 1914 would have dared...

The Cycle of the Shen

Out from 5th September

One of the most exciting new series!
Does paradise only exist in our minds?
Eximere always seemed like paradise to Steven and Roy. Having agreed to act as caretakers for the mansion, they have been spending more time at Eximere, becoming acquainted with its quirks and idiosyncrasies. However, the more Steven and Roy learn about Eximere, the more disillusioned they become. Their recent discoveries of Eximere’s nature have extended their circle of caretaking, and now a century-old creature from a tiny town on the peninsula threatens to unravel the delicate balance that keeps Eximere functional. As they struggle to stop this strange entity from destroying everything they love about Eximere, more of James Unser’s bizarre design is revealed — and the results are devastating to Steven and Roy. The Cycle of the Shen is a fast-paced paranormal mystery, and the tenth book in The River series...

Out from 15th September

From the author of The Paris Architect. The Debt Must Be Repaid ― or Else

In 1886 New York, a respectable architect shouldn't have any connection to the notorious gang of thieves and killers that rules the underbelly of the city. But when John Cross's son racks up an unfathomable gambling debt to Kent's Gents, Cross must pay it back himself. All he has to do is use his inside knowledge of high society mansions and museums to craft a robbery even the smartest detectives won't solve. The take better include some cash too ―the bigger the payout, the faster this will be over. With a newfound talent for sniffing out vulnerable and lucrative targets, Cross becomes invaluable to the gang. But Cross's entire life has become a balancing act, and it will only take one mistake for it all to come crashing down ―and for his family to go down too.

Yes, My Accent Is Real: And Some Other Things I Haven't Told You

Out from 15th September

In the spirit of Mindy Kaling’s bestseller Is Everyone Hanging Out Without Me?, a collection of humorous, autobiographical essays from Kunal Nayyar, best known as Raj on CBS’s #1 hit comedy The Big Bang Theory.
Of all the charming misfits on television, there’s no doubt Raj from The Big Bang Theory—the sincere yet incurably geeky Indian-American astrophysicist—ranks among the misfittingest. Now, we meet the actor who is every bit as loveable as the character he plays on TV. In this revealing collection of essays written in his irreverent, hilarious, and self-deprecating voice, Kunal Nayyar traces his journey from a little boy in New Delhi who mistakes an awkward first kiss for a sacred commitment, gets nosebleeds chugging Coca-Cola to impress other students, and excels in the sport of badminton, to the confident, successful actor on the set of TV’s most-watched sitcom since Friends.

The Gilded Life of Matilda Duplaine

Out from 22nd September

A modern-day Gatsby tale filled with unforgettable characters and charm, The Gilded Life of Matilda Duplaine is a sparkling love letter to Los Angeles and a captivating journey beyond the golden gates of its most glamorous estates.

When young journalist Thomas Cleary is sent to dig up quotes for the obituary of a legendary film producer, the man's eccentric daughter offers him entrée into the exclusive upper echelons of Hollywood society. A small-town boy with working-class roots, Thomas is a stranger in this opulent world of private jets and sprawling mansions.
Then he meets Matilda Duplaine...

Out from 26th September

Get Real is a romantic comedy, urban fantasy whirlwind with sass, sex, and swoon, set in the world of “Cadabras"–humans with magical powers.

Francesca Bellafiore is a good Jewish girl, living up to family expectations that she use her magic to heal others. Underneath, she’s a wannabe badass with her heart set on becoming a detective and solving magical crimes. But nice girls don't disappoint their moms. Party boy Rafael Muñoz does everything possible to publicly disappoint his high profile father. Privately, it's a different story. His carefully crafted bad boy reputation masks the fact he’s a master illusionist, forced into solo covert ops. The role is wearing thin and Rafael longs to be part of a team.

Out from 29th September

With Sandra Dallas's incomparable gift for creating a sense of time and place and characters that capture your heart, The Last Midwife tells the story of family, community, and the secrets that can destroy and unite them.

It is 1880 and Gracy Brookens is the only midwife in a small Colorado mining town where she has delivered hundreds, maybe thousands, of babies in her lifetime. The women of Swandyke trust and depend on Gracy, and most couldn't imagine getting through pregnancy and labor without her by their sides.

But everything changes when a baby is found dead...and the evidence points to Gracy as the murderer.

She didn't commit the crime, but clearing her name isn't so easy when her innocence is not quite as simple, either. She knows things, and that's dangerous...

Marry Me at Christmas (Fool's Gold)

Out from 29th September 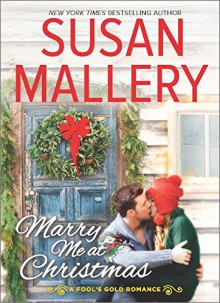 Wish upon a Christmas star with Author Susan Mallery's sparkling Fool's Gold romance!
To bridal boutique owner Madeline Krug, organizing a Christmas wedding sounds like a joy—until she finds out she'll be working closely with the gorgeous brother of the bride, movie star Jonny Blaze. How will a small-town girl like her keep from falling for the world's sexiest guy? Especially with mistletoe lurking around every corner! Jonny came to Fool's Gold looking for normal, not for love. Happily-ever-after only happens in the movies. Still, nothing about this quirky town is quite what he expected, and "ordinary" Madeline is the most extraordinary woman he's ever met. Refreshingly honest, disarmingly sweet. Achingly beautiful... 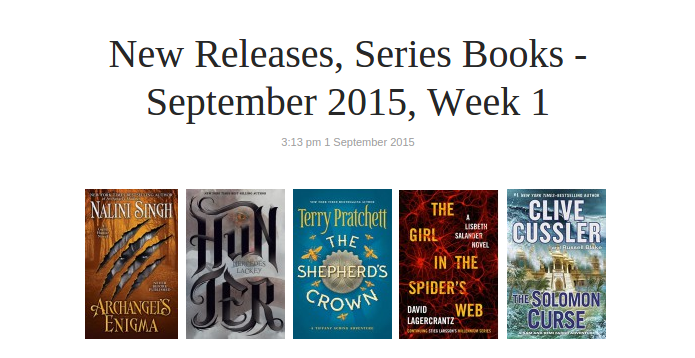 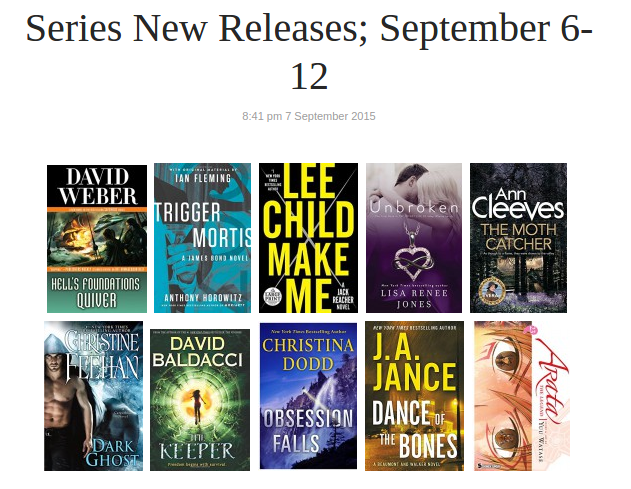 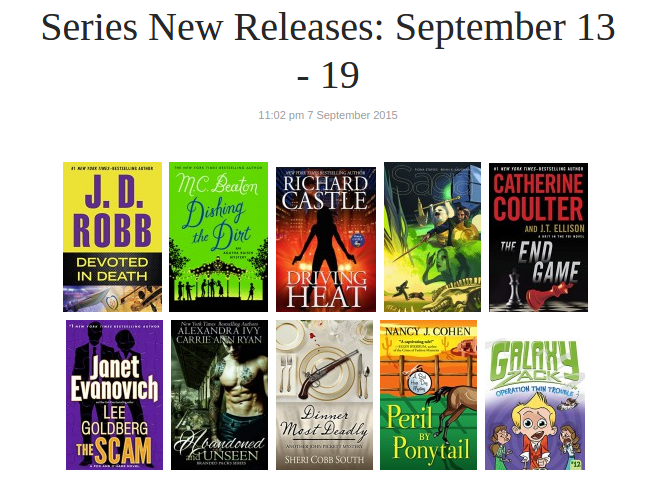 What books are you waiting to seize, Booklikers? Share your #new releases september with us. 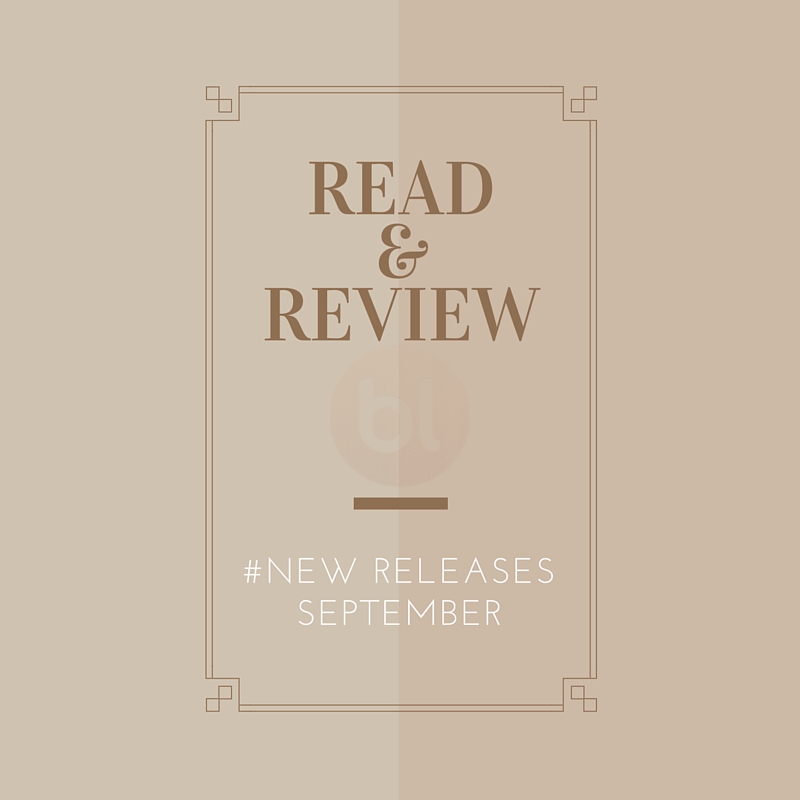